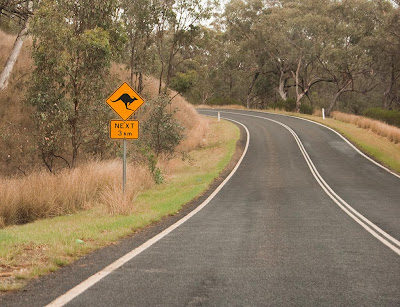 On the way out of Tamworth 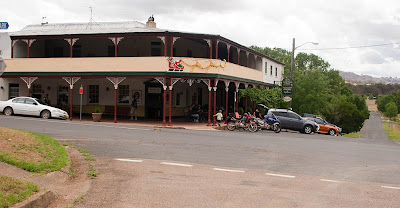 The Pub in Nundle where we had lunch 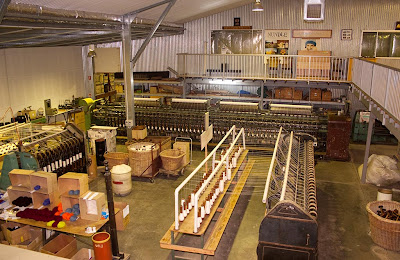 Inside the wool mill
Posted by Christian at 5:45 PM No comments: 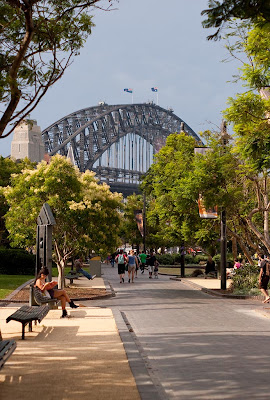 Posted by Christian at 12:12 AM No comments:

(Sunday, December 20 - I think; 38,000ft above the Pacific Ocean)
Kerry and Alex fell asleep before takeoff. I fell asleep just after dinner was served and woke up 5 hours later. Not too bad for someone who doesn't sleep well on planes.

(Monday, December 21; Sydney, Australia)
Finally arrived at our hotel for the night. Exactly 47 hours after we left Purcellville. This is the longest trip ever to Oz. 1 rental car, 4 flights and a short train ride. We left what turned out to be a record snow storm with 21 inches reported and arrived in sunny, 80F weather. Had a nice walk to Circular Quay and dinner at a random resaurant.

(Tuesday, December 22; Tamworth)
Kerry's parents picked us up after a short flight from Sydney to Tamworth and drove us out to their house. It feels great to have arrived, finally.
Posted by Christian at 4:07 PM No comments:

(Somewhere over middle-America at 35,000ft)
Everything was ready. The bags were packed. The reservations were confirmed. And the three of us, Kerry, Alex and myself, were dreaming of Christmas down under. Well, Kerry and Alex were sleeping. I was wide awake watching TV… and the snow.

At around 10:30pm EST I got an automated call from SouthWest Airlines informing me that our flight from IAD to LAX via MDY was canceled. I sat on hold for a good 20 minutes and a helpful agent heard my story of needing to be in LA to catch a flight to Australia. She said ALL flights
out of Washington were canceled due to what was looking to be a record storm. She was willing to switch the reservation to the next day, Sunday. While she had me on hold I called American Airlines through whom we booked the flight from LAX to SYD. He listened to my story but said the only thing he could do was give us the earliest flight available… on Thursday. I told him I’d call him later if I wanted to do that.

Panicked (as usual) I woke Kerry up and gave her the news. We checked everything out of BWI, DCA and IAD and nothing was moving. Then, a crazy idea popped into my head. The storm was mostly East of I-81 and Ohio, Indiana and Illinois were not supposed to get more than an inch or two of snow. What if we found a flight with Southwest out of, I dunno, say Columbus, Ohio. We could rent a car and drive there over night, getting there with plenty of time if we left before 3am. After all, the worst part of the storm was supposed to hit early the next morning and afternoon.

Kerry saw the crazed look in my eye and said, sure… So we called Avis at IAD and secured the car while at the same time making the flight booking. We’ll deal with the original flight, now scheduled for Sunday, later.

We woke Alex up (poor kid, she is such a good sport and a great little traveler), bundled her up in the Subaru and sped off for IAD. Well, sped is not quite right. The roads were completely untreated and already had a nice layer of close to two inches of snow. The conditions were
just awful. Some of the worst I’ve ever driven in (up to this point). I drove as quickly and carefully as possible. Down Route 7; down the Greenway and finally the airport. Kerry got in the driver’s seat and went back home as I waited in the wind and snow for 20 minutes for the Avis bus.

At Avis I managed to get some sort of Dodgmobuickolet-crossover-minivan-SUV thing with all wheel drive, traction control and anti-lock brakes. I took off out of the parking lot for home
and was very pleasantly surprised with our transportation for the day. It took to snow like a husky! Ok an exaggeration but really, it drove very well in the worsening conditions. It was a full blown blizzard by the time I got back home.

Quick shower, change of clothes, pack the car, grab some water, snacks and coffee. Off we went.
My exact words to Kerry as we headed up the Berlin Turnpike: “This is either the smartest thing we’ve done… or the craziest.” Also notable was my description of the first road we took:
“This will be the worst part of the trip.” Ummm, WRONG!

To describe the conditions we drove through the best thing to say is Virginia does a poor job of clearing roads. Maryland does a slightly better job. West Virginia doesn’t even bother to plow.

For the first 5 hours we didn’t see a hint of pavement. What was amazing was the number of people out driving in it. We saw and maneuvered past several conga-lines of plows, several jack-knifed tractor trailers, several cars in the ditch and one car with its wheels pointing skyward.

I knew things HAD to get better the further West we ventured. I made a point of telling Kerry this at least every 5 minutes. The snow was so bad going through the mountains of Maryland and West Virginia that our speed barely crept above 40 mph. We had our new GPS “Gladys” giving us directions and she was also telling us our ETA… which kept getting later and later. Our flight was scheduled to depart Columbus at 12:35. When Gladys showed that we would arrive at 12:22, I felt sick.

Eventually we got to Pennsylvania where the roads were showing signs of improvement and the speedometer was registering higher speeds. We had another dash through West Virginia before hitting Ohio finally. 140 miles to go. Gladys showed 12:19pm, then 12:18, 12:17, 12:16…

My sister called (we were supposed to meet her in Chicago Midway for lunch). She jumped on her computer and checked our flight status. Delayed! 30 minutes! We have never been so
overjoyed by those words.

We got to the airport just on 12:00pm EST. 9 hours and 6 states (WV was twice) later. I practically brought the steering wheel in with me. I had to pry my fingers loose. White
knuckle driving had never been so real.

(LAX International Terminal)
The rest of the trip to LAX was uneventful- almost anti-climatic. No issues with the connection in Midway and arrived here at 4:40pm local time. Booked in to Qantas without a problem and now killing time at the food court in the international terminal. I haven’t slept since I woke up 5am on Friday and, except for a quick chilidog in Midway haven’t eaten all day. It was an epic journey on the level of John Candy and Steve Martin and I am totally, utterly, spent.
Posted by Christian at 10:08 PM 3 comments: 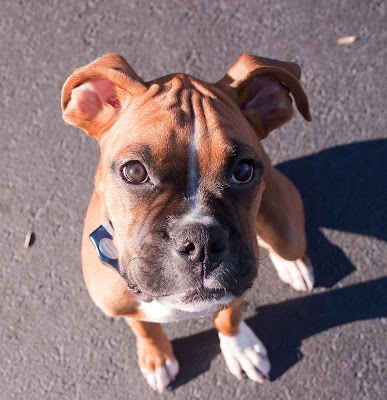 My neighbor's puppy, Baily, the Boxer
Posted by Christian at 6:37 PM No comments: 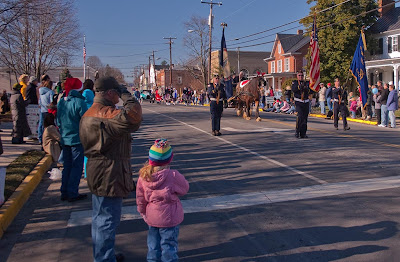 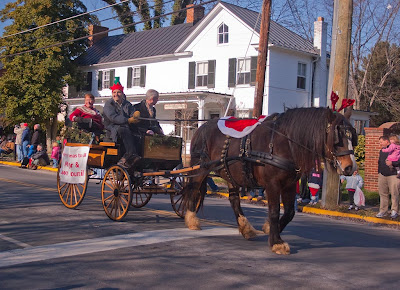 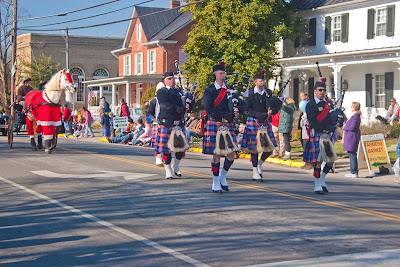 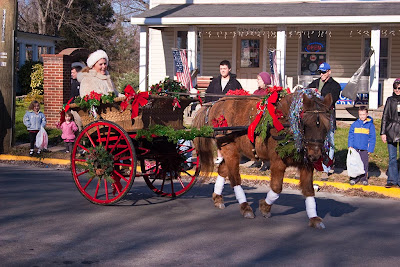 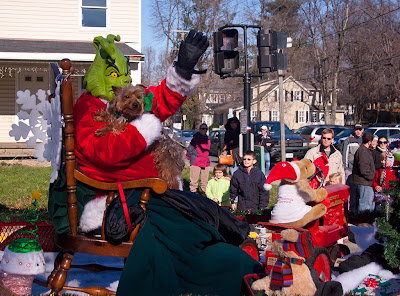 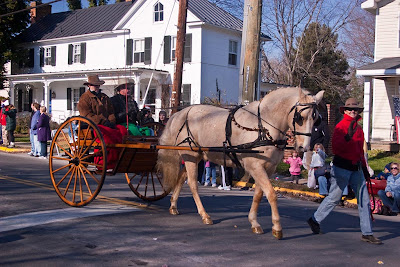 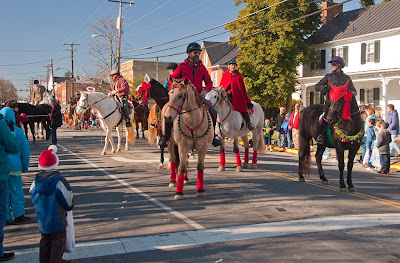 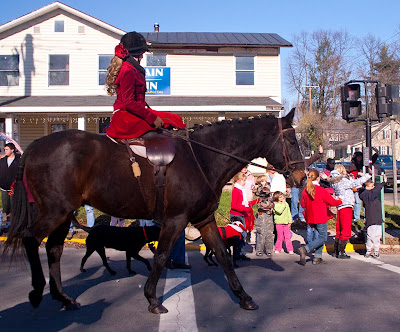 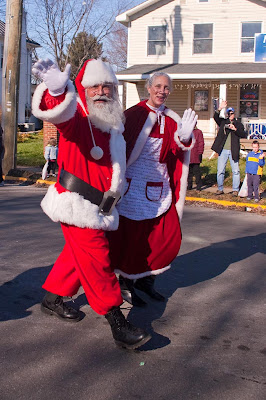 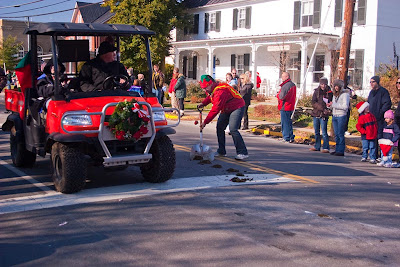 Posted by Christian at 5:52 PM No comments: 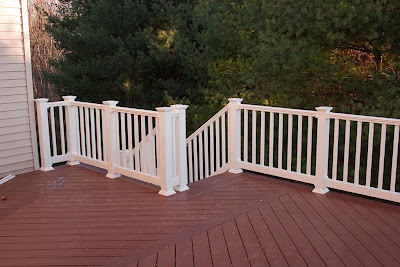 This weekend I finished all the railings including the stairs 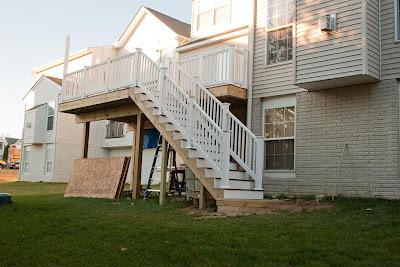 All that's left is the cleanup of all the debris under the deck and the installation of the lattice-work privacy screen above one side of the railings and all around the base of the deck. 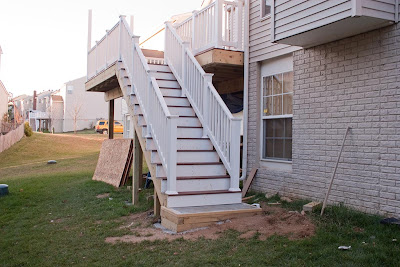 Here you can see the landing at the base of the stairs.
Posted by Christian at 5:33 PM No comments: